Using Kantronics KAM Plus in Linux

One of the older devices I am using in the ham shack is an HF/VHF modem from Kantronics named KAM Plus (or KAM+). This article is mainly about KAM+, but is also describing accessing of serial port which may be used also for any type of serial port controlled modems or TNCs. 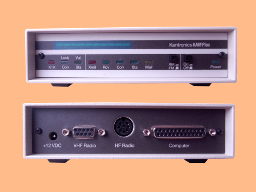 KAM+ was produced between 1988 and 1998, the last firmware version is 8.2. In the '90s, KAM+ was the proper choice for anybody who wanted work seriously with digital modes on HF. The situation was not so easy as nowadays. Internet was not available for normal people (at least in the Czech Republic it was very expensive), so many people were using 1200 Bd packet radio (AX.25) on VHF and majority of HF transmissions were done in RTTY, sometimes ASCII or 300 Bd packet radio, also few ARQ modes (Automatic Repeat Request) gain some popularity: AMTOR and PACTOR I. Digital modes were using not very effective modulations, usually keying of two frequencies (FSK/AFSK), where one frequency means logical 0 (SPACE) and the second is 1 (MARK).

KAM+ with firmware version 8.0 can also connect GPS receiver with uses RS232 and NMEA-0183 (National Marine Electronic Association), but you need to have some external switch on the port between a receiver and computer.

At the time of the greatest glory of KAM+, modems or TNCs (terminal node controller) had two categories: smart and simple (or dumb). Simple TNCs were sending raw data directly to PC port and PC was detecting frequency by zero-cross detection and converting it to data (Hamcomm, Baycom).

Smart TNCs are equipped with a processor itself, also contains A/D, D/A converters and sometimes also DSPs. Such unit can process signal itself so the computer does not do much and works only as a terminal to get demodulated data usually via RS-232 serial interface. KAM+ belongs into this category.

A unique feature of KAM+ is that it works as dual-port TNC. One port can serve HF and the second port can serve VHF. Both ports can be used together with special software working in host-mode. For example, it is possible to monitor DX cluster on packet radio and do QSOs in RTTY on HF. It is also possible to relay data between those two ports. KAM+ can also work as stand-alone BBS and store messages in local 128 kB RAM. BBS is available for HF/VHF packet and also for *TOR modes. Another feature is digipeater and connected stations can communicate via it (another TNC from Kantronics, KPC-9612 was used for a long time on Mir space station). During the '90s, there were many HF BBSes available and it was possible to send and receive emails, which is still useful for ham radio operators on yachts or in remote areas without access to VHF packet.

New KAM+ was sold for about $350 and second-hand is sometimes is also available on eBay for about $50.

What can you do with 20-year-old KAM+ nowadays? Majority of digi-operators now have a computer with a sound card which works as a modem and CPUs are so powerful that it easily mimic DSPs and process all signals from SSB channel or also process wider-band if SDR is in place. Thanks to it, plenty of new modes with better modulation techniques became very popular (PSK31, FT8,...) and there is no chance KAM+ can be used for them. Areas, where KAM+ can be used is RTTY, ASCII, monitoring of utility stations transmitting AMTOR/SITOR and for monochrome WEFAX reception, it can be used for APRS on VHF too. Other modes are not very common anymore.

Another obsolete feature of KAM+ is his tuning indicator made of a bar with 10 LEDs and blinking LEDs at the edges will give you information about proper tuning on MARK/SPACE frequencies. However for RTTY utility monitoring of services with different shifts, you need to experiment which one to set (and for example 450 Hz is not predefined and must be set manually). I think frequency waterfalls showing FFT of all channel are handier when analyzing unknown signals.

On the other hand, using the terminal in GNU/Linux is giving space for doing some magic with received data. For example, redirect them into other tool for their decoding/processing. Also, parameters of some modes can be fully configured, like RTTY, ASCII, SITOR/NAVTEX speed, frequency shift or encoding (specialized programs usually have only most common options). KAM+ also supports different RTTY codes, besides ITA-2, also LCRTTY (case-sensitive) and MARS (Military Affiliate Radio System) are available. You can also mask some bits for "scrambled" RTTY/ASCII modes. KAM+ also support telegraphy decoding, but you need to manually determine speed quite precisely.

Latest firmware version of KAM+ are also very stable, so you cannot see any bad behavior like unwanted changing of sample rate or expeling of some weird sounds, which is sometimes seen on bands due to Microsoft Windows...

Wiring of HF connector is described quite confusing in the documentation, I hope this image is much more explaining:

Accessing of serial ports in GNU/Linux

If you use USB/RS-232 converter, the device is named /dev/ttyUSB*.

Your user also needs to have read/write permissions to access ports. Use command ls -l /dev/tty{U*,S*} to check file permissions:

In the output above, you can see that permission to read and write (rw) has only root and group dialout. If the user is not root or does not belong to group dialout, then root must add permission also for others:

Or the better way is to add the user into the proper group. The user must logout and login back to shell or X11 to refresh groups. The command for adding user bruxy to dialout group is:

In my case, item 0 is COM1 integrated on mainboard, 1 and 2 are ports on PCI-E expansion card MosChip Semiconductor Technology Ltd. PCIe 9912 Multi-I/O Controller.

USB converter will be shown in dmesg output after connection:

This output of lsusb describes a cheap $2 converter from DealExtreme:

PuTTY is a very intuitive terminal emulator. Instead of telnet/SSH select in Session menu serial, select port and speed and you are done. In category Terminal→Keyboard set The Backspace key Control-H to handle Backspace correctly (it looks like that letters are removed on TTY but no backspace is interpreted). Another option to make backspace key work is to set DELETE $7F in KAM+.

You can change setting of the running session by pressing Ctrl+right mouse button.

Screen is terminal multiplexer which also supports serial link, use for example:

Option -h will set a number of lines in history. List in history is possible with sequence Ctrl+a [ and then Ctrp+p and Ctrl+n will scroll up and down. Quit screen with Ctrl+a k.

Next example is showing standard Linux/Unix way to handle hardware devices via files. Parameters of the link like speed, number of bits or parity can be set with stty. The script below reads and writes data to selected port and can be used to control KAM+

To send ENTER in KAM+'s TTY you need to provide <CR> carriage return ($OD, decimal 13, <Ctrl-M>, ENTER key) and because of it, \r is added at the end of an input line.

The script above starts with settings of port parameters with stty. Then there is the signal trap for SIGINT (when Ctrl+c is pressed) and instead of interrupting of the process the information is printed. We to handle the first process running in the background used just for reading from the port (cat < "$PORT" &). Once this concurrent process is running, its process id is saved into variable RPID. The main loop reads data from the keyboard and sends them to the port with that important "\r". To finish this process use Ctrl+d, which is telling to the read that the input stream is finished (EOF, End Of File). The loop ends and the next command will end the background process.

DOSBox also supports access to serial ports and it can be set in config file ~/.dosbox/dosbox-0.74.conf:

This means that /dev/ttyS2 is connected into DOSBox as COM1. Any other parameters of COM1 are configured in used software.

I have tested following programs and all works without any problems:

Automatic settings of the serial port

KAM+ after cold restart (jumper K6) or after the very first run, executes Autobaud Routine when the following message is sent in different port speeds:

Switch off HOST mode in Linux is possible with following commands, in this case, hexadecimal numbers are sent with printf: