Abstract: This document describes installation of DVB-S card into GNU/Linux for EUMETCAST reception purposes, but the first part is suitable also for configuration of satellite TV (DVB-S) reception.

All software below is located on EUMETSAT CD, which get every licenced user. Older versions of EUMETSAT CDs officially supported version of Linux is 2.4.x. Using it with kernel 2.6.x needs another setup of network device and small editing of start up scripts of etokend and tellicast-client. Since version 5.5 are officially supported 2.6.x kernels and GNU/Linux distributions based on RPM or DEB packages.

Why use GNU/Linux instead of Microsoft Windows? I have experiences with Windows XP too and it was not walk through the rose garden. There was problem with driver setup and after many experiments and restarts it leads to complete Windows reinstallation...

I'm using PCI version of Skystar2. The operating system use this card as network device. 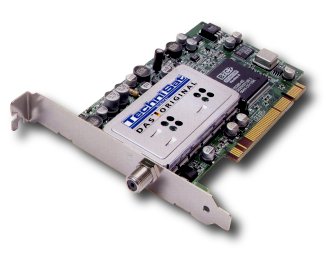 The Linux kernel should load all necessary modules automatically, so check it with command lsmod:

If you have antenna positioned to Eurobird 9, tune to proper channel and test signal quality.

The antenna installation is an important part of the station set-up. You will need following things: 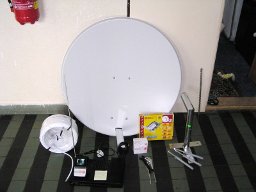 Figure: A material prepared for installation and installed antenna.

For start of EUMETCast reception I created scripts described bellow. The knowledge of mechanism and system configuration is useful for reception debugging and will be described in next chapters.

Tune the card for EUMETCast channel

For European user is the EUMETCast distributed in Ku band by the Eurobird™ 9 satellite:

When reception and signal quality is all right you will see:

The output columns have following meaning:

The szap must run while reception is on, because it is running in the background there is a utility femon for signal quality monitoring. It has same output as szap. When you notice reception problem, first try to check signal quality. The Ku band – 10GHz frequency band has one unpleasant matter, the super high frequency signal is attenuated by heavy snowing or raining.

The reverse path filter (RP filter) blocks incoming packets if source address doesn't correspond with network interface where packet comes (it is used as security against IP spoofing). Indeed if computer has more IP addresses on different interfaces or one interface has more IP assigned then system should deny requested packets. For RP filter disabling use:

This part of setup corresponds with EUMETCast channels you want to receive. Because on the one satellite frequency is streamed more services (time multiplex), it is needed to choice proper data. Service packets are distinguished by its PIDs (Packet Identification) and further by multicast IP address of each EUMETCast channel.

The whole list of EUMETCast services and its PID can be found on EUMETSAT pages (Reception Station Set-up).

For example, you are interested to receive MSG-9 Primary High Rate SEVIRI, MSG-8 Rapid Scanning Service, images of Indian ocean from Meteosat 7, MetOp and NOAA AVHRR Imagery. You will also need to receive TSL Announcement Channel and channels with service status informations and administrative announcements. For these services you can find following PIDs and IP addresses:

Notice that some services has same PID number, next you will set its IP address. Check new interfaces by /sbin/ifconfig. There will be 9 new interfaces called dvb0_0 to dvb0_8.

Each interface needs to have own IP address. Assign IP address with /sbin/ifconfig:

Link it together through SMC router

Pay attention to order of dvbnet commands and right address assign. You can see this in ifconfig listing.

With bold is emphasized RX bytes, you see that interface is receiving some data. The Base address, here 0x1fe is in decimal 510, the PID of EPS-15. To convert hexadecimal numbers to decimal use command echo $((0x1fe)).

For DVB network switch off use following commands:

For EKU and Tellicast installation follow the instructions from EUMETSAT on their CD.

There are two scripts you will copy to system directory /etc/init.d. They are called etokend and pcscd. Both use deprecated option LD_ASSUME_KERNEL, so edit both scripts find the lines which contains it and comment them:

For this step follow the EUMETSAT documentation. You will add your recipent ID to /etc/recv.ini and also log_file, I use log_file=>&ght/var/log/recv.log – the log file is stored in /var/log directory. For more detail debug information set log_level=verbose. Configure RAM disk (see section RAM disk) and finally select the EUMETCast channels).

Then select received channels in /etc/recv-channels.ini, the good tutorial for this is EUMETCast hints+tips. I recommend to use for each channel separated part, with this syntax:

The data channel names you can find on EUMETSAT pages. I recommend use for each channel it own directory. Because huge amount of files is received, then programs for image processing or file managers became very slow. Splitting files to more directories saves file system performance.

Because hard disk I/O operation is bottleneck of the high speed data transmission of satellite data, it is necessary to setup RAM disk. I verified that without RAM disk is possible receive only one channel. When you add more channels for reception, then some amount of received files will be lost. Lost segments distorts image data.

Against that with RAM disk enabled should be received more then one channel and receiving software is more stable.

RAM disk in GNU/Linux is enabled when system boots with parameter ramdisk_size=n  kilobytes. Most GNU/Linux distributions use boot loader grub, with configure file /etc/grub.conf. Find the command with kernel parameters and add ramdisk_size. I found that 128 megabytes is sufficient.

The RAM disk will be enabled after reboot. Check it with command:

. The kernel info about RAM disk is:

Don't set parameter tmp_directory in /etc/recv-channels.ini same as file_database_directory. I did this and no file were received, but log was full of messages like this:

I spent many hours of research and EUMETSAT help desk emailing before I found that tmp_directory and file_database_directory must be different!

If DVB device is tuned, virtual network runs, it is possible to start file reception. You need to enable EKU and start tellicast-client. Run the starting scripts in this order:

Next check Active Channels, when reception is running the TSL Announcement Channel is Active and Data Channels will contain list of currently received channels. Look for Error in Data Channels table, probably is not properly set IP or PID if this error occurs. For automatic checking of EKU and reception see Monitoring.

For further information check Log File, during few minutes of reception you will see many lines about received files, announcement or some error messages. Check the channels you receiving with:

Now reception it is running, and you can start with image processing!

After DVB stream interruption, e. g. due to bad weather condition the SkyStar2 card could hangs up. Frequency of this hang-ups was for me two per week, but after setup of RAM disk it looks, that problem disappeared.

When some errors occurs the Tellicast has watch dog and starts user defined script. You can configure it in /etc/recv.ini:

When the reception hangs up, then the log file will be filled of some message lost and coordinator lost warnings. The option error_script_cause_announcement defines how many messages should occur before error script is processed.

There is an example of messages in the log file:

The problem with EKU communication causes lost of licence info, then no files are received. The symptoms of the problems are: the EKU is connected and lights, all EKU programs (etokend, pcscd) are running, but there is empty host_key_4 in Tellicast web interface in Licence section, normally there should be ****-****-****-****. There are plenty of messages Failed to decode key in the log.

The EUMETSAT offers simple monitoring utility monitor-eku-decoding. It is located on CD version 5.5 in Linux/Tools/monitor-eku.tar. This script periodically checks log file for Failed to decode key messages and if the message occurs the Tellicast and EKU daemons are restarted.

The order of programs stops and starts is following:

In dependence on number of channels you are receiving, there is often huge utilization of disk space. Every hour is received hundreds of megabytes and the hard disk should get full after few days of reception. The best way to prevent this is periodically process the image data, store processed products as images and delete all unnecessary raw data from target_directory (specified for each channel in recv.ini.

For periodicallThe helper utilities are cron and find. Cron is standard UNIX daemon which periodically start specified program. Login as root and run command crontab -e and add a one or more lines like this: